The ABA accepted the specifications for the E-13B font and use of magnetic ink as a standard in 1958, and then in 1959 the first ABA publication for MICR was issued. This was Publication 147R, “The Common Machine Language for Mechanised Check Handling”. Deluxe Check Printers of the USA produced the first commercial cheques using letterpress printing late in 1959. Lithographic printing and impact ribbon were adapted to the process shortly afterwards. The American National Standards Institute (ANSI) adopted the ABA specifications in 1963 as the American Standard. The UK, Canada, Australia and a number of other countries adopted these standards, with local revisions.

An alternative MICR font called CMC-7 was developed by the French computer company Machines Bull and was adopted as the French standard in 1964. This is also magnetically readable and is widely used in Europe and South America.

MICR, printed to the ABA specifications or the local version, is still the most effective high-speed machine-readable code, and has proved extremely reliable in processing large volumes of documents in Banking systems worldwide.

The MICR proofing systems have also developed since the early 1960s to incorporate scanning technology and advanced optical character recognition techniques to improve the automation of document processing. This technology, known as “Image Processing”, provides the means for converting the image of documents into a digitised format suitable for electronic processing and storage. The data contained in the MICR codeline is still predominantly captured magnetically.

The character set for E-13B is a limited font set comprising the ten numerals zero to nine (0123456789), plus four special symbols designated as follows:

Being of US origin all dimensions are imperial and metric conversions are inappropriate because of rounding inaccuracies.

The E-13B font is a fixed pitch of 8 characters per inch. The characters are basically constructed from a series of thick and thin vertical and horizontal strokes. These are laid out on a 7 x 9 grid of 0.013 inch squares. A thin stroke is one square wide and the thick stroke is two squares wide. Corners are rounded off to a standard radius of 0.0065 inch (half a grid square) except for zero where the radius is a full grid square of 0.013 inch.

There are also detailed specifications for character positioning which cover spacing, horizontal and vertical alignment, plus skew. Additionally, the characters must be printed with material of suitable magnetic strength, as measured by “signal strength” and the quality of the printing is specified by various tolerances.

The MICR characters are contained in various “fields” which represent values for specific data strings. The data in these fields identifies such details as the Financial Institution, its branch and the number of the account to which the transaction is being processed.

The character set is designed using a grid of 0.013 inch squares with rounded corners normally of a radius 0.0065 inch, with the exception of the number zero, and the curve blends with adjacent edges. In the case of zero the inner radius is 0.013 inch and the outer radius is 0.0260 inch. 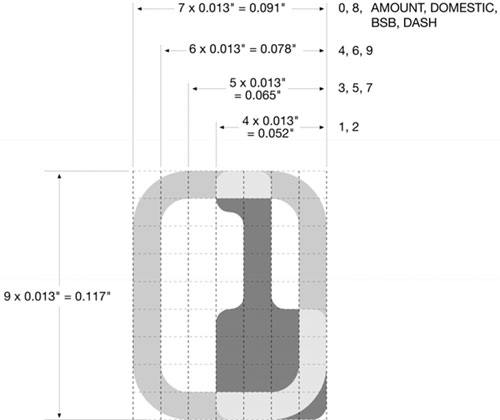 The distance between the right average edge of adjacent characters is 0.125 inch ± 0.010 inch.

An additional tolerance of ± 0.625 inch applies between fields when printing does not have to meet the requirements for adjacent character spacing. This applies only when fields are separated by a minimum of one blank space.

Alignment is the relative vertical location of characters within a given field. The alignment is measured relative to the horizontal centre line of each character.

Within a given field, the bottom edges of adjacent characters must not vary by more than 0.030 inch. For the Dash and the Domestic symbols, these measurements apply to the centre-line.

These tolerances shall not accumulate so that the characters impinge on the limits of the 0.250 inch MICR band commencing 3/16 inch from the bottom reference edge of the document.

Skew is the angular deviation of the vertical centre line of a character from a perpendicular line relative to the bottom reference edge of a document. The maximum skew allowed for any character or field is ± 1.5 0. 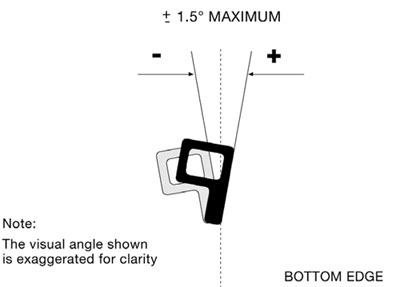